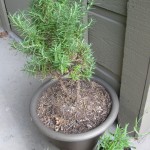 I’ve determined that the rosemary bush on my patio is getting way too much water, thus it has been slowly browning from bottom, working its way up. I’ve decided to hard prune the plant and remove it away from the sprinkler heads that water the rest of the patio garden. I’ve also removed the surviving lavender plants as well, to keep the rosemary company. They all still get morning sun, but hopefully they won’t have to suffer root rot due to over watering. I’m contemplating moving the rosemary to a larger pot and changing the soil medium into something that won’t retain moisture…perhaps some gravel and sand.