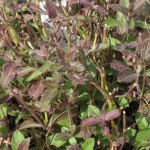 After attending a clinic at Calloway’s on lawn maintenance, the man and I went on a trip to downtown Grapevine, followed by a visit to the local nursery, Blooming Colors Nursery & Landscaping. Despite the small winter inventory, I found signage and 2 new salvia to take home with me. The species? Sinaloensis, or more commonly known as bicolor sage. So named due to the dark purple-bronzish coloration that the leaves take on with more cold exposure. Unlike the other salvias that I favor so much, this perennial salvia is considered a groundcover, rising no more than 12 to 18 inches in height. Even now I am trying to determine how to place it in the blue garden.
It is a noted entry in the plant list for PlantsForTexas.com. The blooms are described as bright blue with white markings.