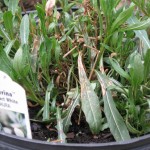 Some industrious critter thieved one of my hippeastrum bulbs. The telltale mound of dirt it had dug up was the only evidence left of the missing bulb. I am hoping it wasn’t one of my pups…’coz I’d be really upset.

After discovering the theft I began the laborious work of transplanting the gaura, dianthus and white salvia. Who knew gaura could get so huge? I have them currently residing in what I believe are 5 gallon pots. I am not sure how well these will respond to transplanting, but I am hoping that given the sprightly spring growth that they will survive. Can gaura be divided? That mass of huge roots suggests otherwise; I am going to have to do a little research.

Two dianthus specimens that had languished in the purple bed have been moved into the lily bed under the myrtle, which will hopefully be a happier home for them. I also transplanted a third into a pot, the tiniest surviving dianthus from the purple bed. The remainder will stay put until I’ve determined how to reorganize the bed.

White salvia moved. I am now deciding if a weed mat should go down on the salvia wall. The ground is uneven and could use some leveling, but I’m also thinking that it could benefit from some additional specimens of sage. A cultivar of the Mealy Cup Sage, salvia farinacea, Henry Duelberg, recently caught my eye. What surprises me is that it’s supposed to be perennial, being a relative of the Victoria Blues that we used to dress our front yard bed. Methinks with the harsh icy weather we had in February that these Victoria Blues have been killed off. They had begun sending up shoots when the blizzard came around. Even the potted specimens that I took have shown no signs of reviving…and this mild weather has been causing all the salvias to leaf out. I have another farinacea cultivar, Sea Breeze, in seed form ready to be sown.