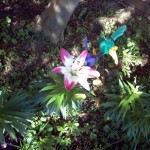 The first lily of the year just made its appearance. My sweet cheeks spotted this Lollipop lily making a grand entrance in the lily bed–luckily he had his new camera phone to capture the moment.

Other blooms seen in profusion include the Oertel’s rose yarrow and the late blooming dianthus. The pansies are still growing strong, and the Hot Lips salvia is just now beginning to put out blooms, after a slow start.

The variegated society garlic have dropped their flowers, though the catnip is daring to bloom immediately, after having been relocated between the rosemary and lavender. There are yet plenty of peppers to put into the ground, but with this last taste of cool weather (May 1st lows of 48 degrees), I am hoping that warmer weather will permit the basils and peppers to flourish.

I also moved most of the Flame Callas to the salvia bed, in hopes that they will take to their new home soon. I know there is still a calla positioned under one of the oxalis plants in the lily bed, but I’m unsure what color it is or where to put it (except in a pot). Hopefully this next weekend I will have time to replant it.