Now we have another Victoria Blue salvia blooming on the far end of the front flower bed. So that makes for two flowering salvia farinacea that have returned from last year. There are yet 2 more young Victoria Blues that have been slow to come up. I don’t mind their slow return, which saves me from purchasing more, but the man wants that extra pop right now.

Talk about slow…the gardenia has new leaf sets, despite that it has lost about 75% of its foliage. It survived the bitter winter frost, which is amazing in itself. I don’t want to prune it back because there is evidence of new life on it. It’s going to be a very slow recovery.

One of the Confetti lantana is putting on a set of buds. Its sibling about a foot away has been more interested in trailing rather than flowering. I also had some criticism for the man for planting the vinca seedlings so close to each other. They grew into monsters last year, and I don’t expect it to be any different this year.

The man trimmed back our centerpiece loropetalum in this front bed, just to give it some shape for the rest of the year. I am interested in seeing it grow higher, but I won’t begrudge it a little width to shade the tiny impatiens seedlings at its feet. The man also hacked down the Hot Lips salvia…that thing has grown into a monster in the front bed and is in constant need of pruning. We did finally get another Hot lips planted next to the Autumn Twist azalea and expect the same vigorous growth this year.

Notice the verbena colors? Maybe I don’t need Mosaic after all. The Dallas Star daylilies are heavily laden with scapes!

Finally, my newest heuchera seems a little lonely in its corner of the shade bed, but I hope it will be happy there. It has a caladium bulb for a neighbor…although I can’t say that I don’t want to plant another hosta next to it. 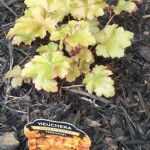 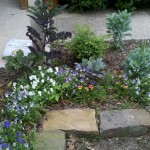 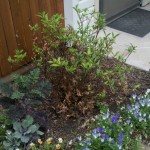 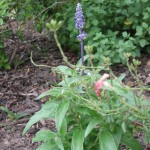 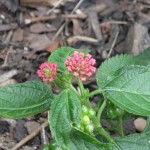 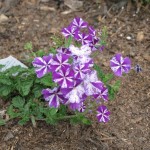 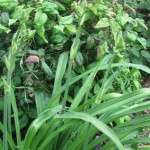 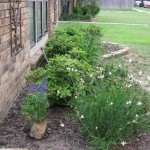