I discovered my Asahi zuru in dire straits–walked out on the porch yesterday and noticed that most of its leaves were curled and drying. I questioned the waterboy–who swore he had been giving the japanese maple plenty of water. Then he later recanted, stating that maybe he missed it after all. So, basically, the poor tree has been struggling through the past few 100 degree days…can it be rescued? 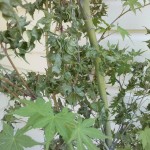 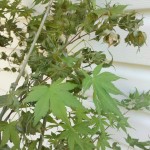 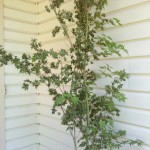 Despite several gallons of water to saturate the soil, I believe more than 75% of the foliage will be lost. I am just waiting to see when they will be dropping off. I hate to write off this JM even though it lost most of its variegation last year and probably won’t get it back. It’s still a Japanese maple and pretty in that JM way.