Early in the year, I gifted my friend Kathy with some salvia cuttings and transplants. She lives in a rental home in Lewisville, whose lawn and yard is mostly tended by very friendly and considerate neighbors. She swears she has a brown thumb, but I was quite certain that she couldn’t kill these plants. Her front yard is a steep grade (nearly 45 degrees) from the street to her front door, and she swears anything she tries to plant in it gets washed down and away.

I provided her with two red salvia greggii cuttings, 2 Hot Lips salvia cuttings, and 2 sets of Coral Nymph salvia coccinea seedlings that volunteered from my own garden. We planted them into a bed just in time as the onset of the summer heat. Her yard gets the benefit of some high shade during the early morning and afternoon. She refused to mulch because, again, she was concerned that it would all wash out of the bed down the slope toward the house. She watered deeply during the drought, but I’m certain her watering schedule was infrequent. During the summer heat wave, I visited once a month; she lost one of the greggiis, but the rest survived.

On Friday afternoon, I visited her house to tend to her pups while she was out of town and beheld this: 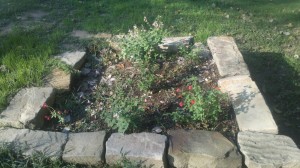 The remaining plants I gave her were in bloom. The Coral Nymphs appear to have multiplied (crazy reseeders that they are); the Hot Lips were a solid red, but I was sure it would revert to the bicolor blooms sooner or later. Next spring, I expect them to grow 2x to 3x their size.

Salvias thrive on neglect–which makes them perfect plants for xeriscaping and forgetful gardeners. The occasional rain perks them back up again and  guarantees a flush of blooms every time. I love these plants!