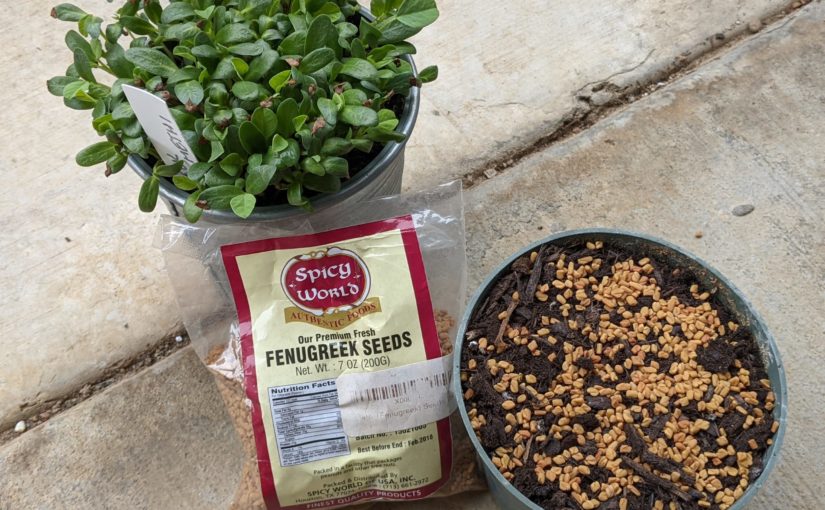 Fenugreek is an annual herb used for its seeds and leaves in Indian, Mediterranean and Middle Eastern dishes. I came across this herb in my attempts to perfect a butter chicken recipe. Its seeds are a base spice in garam masala, a complex spice blend used in curries and marinades.

Fenugreek has been used throughout antiquity as a spice and in medicine. It is so ubiquitous in Middle Eastern and Indian cooking, that the only thing I haven’t seen it used in is dessert.

In my kitchen I tend to add the dried leaves and toasted ground seeds to rubs and curries. However most kitchens will have difficulty accessing this spice unless they have a local Asian market that sells it. It’s not something you find readily at your local grocery store.

I learned of an easy way to produce my own fenugreek. Turns out fenugreek can be easily sprouted from fresh seeds sold in the spice trade.

I picked up a packet of seeds from Amazon in 2016, broadcasted the seeds in a pot, watered, and waited for the sprouts. The seeds remain viable for a long time as long they are stored in optimal condition.

I plan on using the sprouts as a garnish in salads. As soon as weather turns warmer, I may try to grow it in the garden and see how well it does in Texas summers. Hopefully I’ll be able to produce my own seeds to fill up my spice rack.