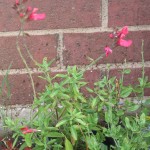 This is the first official day of summer, and surprisingly, it’s 90 degrees cool. Possible rain in the forecast this week, but for now, I am enjoying the nice breeze outside and the clouds scudding across the sky. 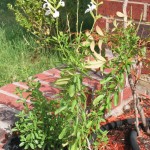 Texas summers aren’t like other summers. Summer-blooming lilies don’t behave true in the brutal Texas climate. All of my beds have long shed their colorful blooms and have settled into a green state, storing food for the coming winter. However, a few of my late-purchased bulbs, notably the dwarf lilies, are bravely putting out buds.

Yesterday, I took a pruning shear and started lopping the dead twigs off the Hot Lips salvia and pinched off spent blooms on the Red salvia greggii. The Red salvias still look spectacular, aflame in red buds. The two Hot Lips that received extra pruning are trying to make a comeback, despite looking yellowish. I noticed a scattering solid red and white blooms on them earlier today. The purple greggiis have settled into quiescence, while one of the new San Antonio greggiis flowers profusely. Dad’s white salvias still haven’t been planted, but they are merrily blooming in their pots.

On my nightstand reading list…The New Book of Salvias: Sages for Every Garden by Betsy Clebsch.