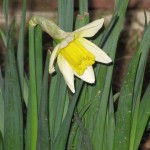 What I originally thought was the first Thalia narcissus bloom in my garden bore further inspection after I took snapshots of it yesterday. This was not the all-white, multi-flowering, orchid-like daffodil that I was expecting! Both blooms that I had seen so far boasted a white perianth and a yellow (!) cup. It caused me grave concern as I was about to shoot off an email inquiry to Brent and Becky’s about it…until I racked my brain trying to remember if I had EVER purchased and planted daffodils before.

Then it hit me…Breck’s. I scoured my old archive email for an answer–thank goodness, I still kept those around. And there it was, dated 4/14/06, an order from Breck’s for 2 packages of Accent Instant Bloom Daffodils along with some Inzell, Frosty Beauty, and a color assortment of tulips. The tulips which I had lost in the beds some time ago had occasionally surprised me with a red or yellow bloom here and there (I wrote off the Frosties a long time ago), but I had never caught sight of the Accent daffodils until now.

It made perfect sense now why the yellow cups faded to pink, as the Accent supposedly had salmon/pink cups as they aged. I’m not sure how many of these Accents have survived over the last two years, but it’s a testament to their hardiness that they persisted this long. Mystery solved.