After our meal at New San Dor on Sunday, hubby was persuaded to do some lawn work. We stopped by Lowe’s to pick up a bag of weed-and-feed to treat the henbit weed infestation that has covered most of our front lawn. To my surprise, he fired up the lawn mower (which started on the first pull) and proceeded to scalp the lawn. Meanwhile, I busied myself on getting the plants that had been hardening off on the porch into the flower beds.

I am looking forward to purchasing another flat of dianthus; the 18-count flat that I got from Cristina’s are filling the front borders of B4 and B5. I had 2 or 3 leftovers that I proceeded to locate in B1 and B2…but there are still many more holes left to fill. I also grabbed the 3 Lowe’s ajuga and set them in B3, along with one of the Sooner ajugas. I’m concerned that the Chocolate Chip ajugas look dissimilar: the Lowe’s-purchased ajuga are darker and smaller-leafed, while the Sooner ajuga have longer, bronze leaves. Both were flowering blue however.

I situated the Oriental Limelight artemisia in B2 and B4, both centered in the bed…I noticed these specimens were busting out of their pots. I wonder how invasive they will be. Do they pose a threat to my lilies and daylilies? We’ll see as summer draws near.

Finally, I got the Hosta sunk into the ground next to the Hot Lips salvia in S1. I also planted the heuchera next to it. I’m hoping the newly pruned salvia will branch out and offer some shade to its new neighbors when the summer heat arrives. 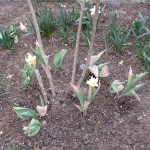 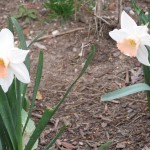 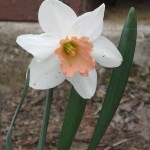