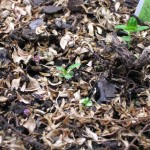 I bought a couple of hard-luck cases at Home Depot in early December: two Mexican heathers, Cuphea hyssopifolia, for a buck apiece. I noticed them primarily for their yellow green foliage at the time, which was striking, though I was unsure if this was a seasonal change or typical coloring. The quart sized bushes were dressed in tiny purple flowers and showed no signs of stopping well into winter. However, as the temperatures plummeted, I saw that they struggled to stay green, and when we finally experienced some snow, I brought them in under the grow lights to defrost. My man is of the opinion that they might survive since he saw evidence of new growth. I’m more inclined to believe that they have reseeded since most of the top growth has all but died off. I am hoping that a good shearing and being indoors will resuscitate these specimens after their heroic efforts to stay bright and cheery in early winter weeks.