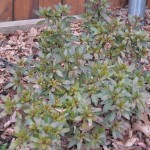 I assessed the courtyard flower bed today to inspect the azaleas and determine future plantings. Most of the azaleas in the bed have not demonstrated significant growth in 2010.  They flowered once in late spring then settled in for the grueling heat of summer. All but the Macrantha Orange reminded me of molting birds, dropping some of their foliage, appearing spindly and half naked.

The Macrantha azalea’s winter display is the best of the bunch, remaining fully dressed to date. My memory of its blooms is dim; I have it recorded as having crimson-orange blooms, but I don’t recall it being as floriferous as Hot Shot. Bloom season coincided with the Gumpos, around mid to late spring. Not a cultivar I would pick up again, despite its foliage.

Two Gumpo pink azaleas appear to have perished, having lost all of their leaves with the onset of winter. One of the Gumpo die-offs I can attribute to more sun exposure than the rest, but I don’t have a clue as to why the other one dropped all its leaves. I enjoyed the dwarf mounding habit of these azaleas, perfect as a groundcover, though I would prefer a more full-bodied appearance. Perhaps with a little more maintenance this spring, I can encourage them to look better. The snail-slow growth rate of these shrubs reminds me I should be patient with them. At $2 a piece, I can’t complain with their evergreen performance so far.

The Hot Shot azalea showed off the most dramatic color change, turning a dark, reddish-purple with the cold temperatures. This specimen had the brightest red flowers; a keeper if I can get it to prosper. It is also listed to be a moderate grower, topping off at 4′ in height and 5′ wide. It’s a good bloomer as well. My specimen will have more growing to do to reach its maximum size, but I may have to consider moving it if it experiences a growth spurt this spring. I suspect its winter foliage might be a result of receiving more sun the other azaleas in this bed; having another specimen in deeper shade might test this theory.

Delaware Valley White azalea: floriferous but single-flowered. I prefer a double-flowered form, but DVW’s saving grace is that it puts out flowers early. Currently its winter display is similar to the Crimson azalea, leggy and spindly.

The Crimson azalea was the most disappointing of the $2 azaleas, more pink than red–not a bloom color that I found attractive. Sitting in the shade of a crape myrtle, I expected it to fill out, but instead it is the most anemic of the small shrubs in this bed. It has an upright habit, but because of its bare ankles, it currently looks unattractive. I am contemplating yanking it out and replacing it with a Hot Shot.

On my wishlist: I wanted them last year, and I still want them in 2011. Kaleidoscope abelias. I’ve found some info that suggests that abelias can endure in full shade and even remain evergreen. If this is the case, then I look forward to planting them in the front yard shade garden. I am unsure if their size will allow them to work into the courtyard flower bed though.

Another wishlist shrub is nandina. The winter show these nandinas are currently putting on is stunning. I especially love the texture of the smaller nandina and similar cultivars. I realize that putting them in shade however might negate the fiery display of these plants in winter, but having something evergreen in the shade garden will alleviate the emptiness. The lone nandina positioned in the gardenia bed, Moon Bay, has tolerated part to full shade conditions. It has demonstrated slow growth in this spot and has darkened in foliage color throughout summer into fall and winter. I will need to observe it for spring growth to see if will show off lime green coloration again.