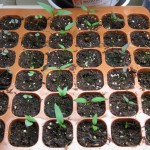 My Swallowtail Garden seeds arrived this week. With so many choices of seeds to start, I was hard-pressed to find space under the grow lights. I procured the scrap piece of plywood sitting in the laundry room and used it as a base for the Burpee growing system, which I then rotated 180 degrees to free up some real estate.

The phlox have been bursting out of their seed cases this weekend, and I detected some whiskering roots from the Blue Knoll Chrysanthemums. Because I doubled up on the seeds, I decided to separate the mums into 2 rows of 6, for a total of 12 starts. The dianthus, as I expected, grew surprisingly fast since I sowed them last Tuesday. They appear to be the most vigorous growers in the 2nd half of the grow system.

Since I received the columbine seeds, I decided to test the coir pellets for growing perennials. I placed 8 pellets this morning in a spare takeout dinner tray and expanded them with water. With any luck, I will have 4 each of the Origami Blue and Origami Red columbines.

I also discovered today that the first Purple pastel salvia that I sowed had reared its head out of the 3″ pot I planted it in. I half-expected it to start later, but it’s been exactly 7 days since I first planted it. It’s parent plant is now occupying the sink next to the grow lights, and is slowly regaining its foliage. I now have high hopes for the white salvia greggii seeds I planted in 2 more pots. I spent the entire day Sunday collecting seeds from the white specimen against the neighboring wall. It flowered so vigorously up until January–I am looking forward to fostering more. One thing I noticed about the white salvia seeds I collected: some are nearly black while others are tan in color. I am unsure what the difference may be, but I am hoping I didn’t plant chaff.

For the last row in the grow system, I chose to plant 6 seeds of the delosperma I purchased from Swallowtail Gardens. I’m looking forward to growing my first succulent groundcover.

Activity in the other takeout trays is brisk: the alyssum are popping like crazy, the impatiens are finally making a showing. The only seeds which haven’t emerged are the garlic chives in 2 pots. I don’t remember them being so slow, but I’m hoping they will make up for it later.

Lastly, the ornamental peppers are beginning to show some evidence of color. All of the pepper varieties are displaying remarkable growth, while the basil seedlings appear to have slowed down somewhat. But the first set of seedlings are displaying 2nd and 3rd sets of leaves, so it’s been exciting to watch them prosper.

The weather was unseasonably warm this past weekend, reaching 70-75 degrees during the afternoons. However, we have an icy week forecasted as early as Tuesday morning, so we’ll be back down to frigid temperatures. I’m hoping this will be the last freeze of the year.