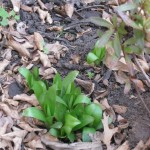 From Walton’s, I purchased a 3-foot rosemary topiary and 4 Ice Follies daffodil bulbs. From Home Depot, 2 red amaryllis bulbs. I would have purchased some caladium bulbs, but Calloway’s offered only some small bulbs of the kind a desired. I was tempted to pick up some other flower bulbs, but was unsure that they would produce this year.

As part of this weekend’s activities, I raked and cleared some debris from the courtyard and front flower beds. I also took some time to cut back the salvia wall, taking care to mulch where necessary. The weeds had rampaged much of the fall and I hoped the mulch would suppress some of it. I still need to move the white salvia over one foot, and add another.

In the flower bed, I sheared back all of the dianthus, trimming off much of the frost-bitten tops. I also cleared some debris, revealing some more early lily/daylily starts. I’ve had to cut down the dead gumpo azaleas and have been contemplating fertilizing and mulching the remaining specimens.

In the front beds, I’ve had to clear many leaves, though the gardenia bed proved extremely labor-intensive. Even today, another blanket of leaves has settled in the bed. I’ve decided to hold off on any more clearing until we are well into March.

I am concerned however that the Foxtail ferns may have succumbed to the frost, though some digging in the area unearthed some live root stock (which I took to make a planting out of). Unlike the other ferns in the bed, there is a distinct mound where each foxtail lay buried. I had hoped to find some new growth after I trimmed off the tops, but had no such luck. I await the warmer weather to stimulate the ferns back into green. Meanwhile, I planted the 4 daffodils in a row behind the planting astilbe. They were showing some live growth, and I am hoping that they will take off in a few weeks.

Next on the list to be planted are the red amaryllis and the rosemary. Meanwhile, I am thinking of expanding our grow light room to include bulbs and more seeds.