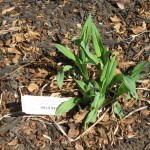 The red garden amaryllis bulbs are planted! Yesterday morning, during a break in the late winter showers, the bulbs went into the lily bed in front of the Delaware White azalea. In the course of digging I hit a neighboring lily bulb, which I hope won’t be too badly damaged by the disturbance. In the process of cleaning up the bed this past weekend I’ve noticed that the Dallas Star daylilies have sent up green shoots. The Hyperion daylily only came to my notice about mid-week, so it is definitely slower to bolt than the Dallas Stars. 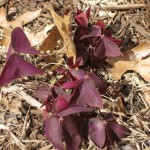 Meanwhile, early this week I discovered a couple of interesting sights in the blue bed. First, I noticed that the yarrows had apparently spread underground and had begun sending up shoots about 6-8 inches from the mother plants. I had not known that yarrows were aggressive spreaders so these two specimens bear watching in the coming year.  Second, the oxalis have begun to leaf out. I have been thinking of relocating them in the lily bed to provide additional color throughout the year once the lilies have died back. Finally the violas in this bed have begun to ramp up flower production…though not as vigorously as the red and white violas in the lily bed.