This weekend I filled up the 2nd tray of Jiffy 7 coir pellets (Professional Greenhouse 72), 72 seeds in all. For the harder-to-grow seeds, I attempted to triple and quadruple some of the seeds in hopes that stronger seedlings result.

On our trip to NHG this past Saturday, we bought a Midnight Blue rose (with several closed buds already on it) and a Lime-scented thyme. For some reason I did not find good specimens of Coconut thyme at NHG…so I will most likely pick them up elsewhere, maybe Calloway’s. I also bought two packets of seeds: garlic chives and lime basil. Too late I discovered that a couple of chives are just now sprouting in the same pot as the Iona Blue pansy. Based on a pot of chives I saw at NHG, I sowed 6-7 seeds of the used packet of chives that I had left over in 2 3″ pots. Perhaps growing them thick is the key.

I brought out the tray of vinca seedlings into the light. With counter space at a premium, I’ve had to do some fancy rearranging in our bathroom greenhouse. I decided to put out all the pepper plants, including the ornamentals, out in the yard to make room. I’ve also set out the tallest of the hosta plants. I imagine I also be putting out the 2 cupheas sitting in the bathtub…they haven’t done anything since I put them in there, so I believe they would prefer a stronger light source.

I noticed that through neglect one of the Oriental Limelight artemisias nearly died back into the pot. Luckily, a little water restored it, though some stalks were lost in the process. I’m still trying to decide if I should turn them loose in the landscape or just keep them potted.

By the way, I found this free online planner that meets most of my criteria for designing a garden bed: http://www.smallblueprinter.com/garden/planner.html 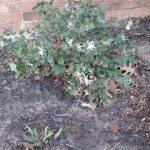 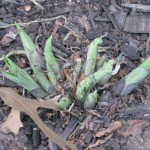 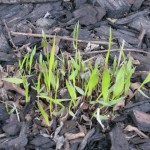 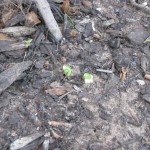 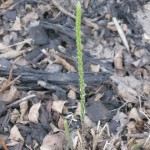 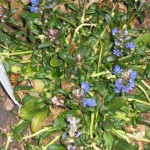 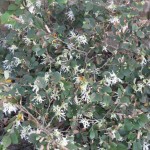 Also this weekend, finally accomplished setting down weed mat on the salvia wall. Next mission: gravel or mulch, not sure yet. In the herb garden, transplanted one of the golden oreganos and the lime thyme. I’ll need more soil/compost to finish transplanting the rest of the herbs in the cinderblock wall.