Earlier in April, I mentioned starting some seeds from a purchase I made from Baker Creek Heirloom Seeds. I also visited Painted Flower Farm and North Haven Gardens to pick out some plants for the shade bed. Since then I’ve made additional purchases in attempt to satisfy my plant addiction.

Hostas are the last major addition I’m looking forward to dropping in the shade bed. I chased down a Facebook group that lists a variety of hosta sources. Island Breeze, Hans and Dancing Darling are enroute to me, courtesy of Tims Hosta Farm.

My lemon balm seed starting efforts have been frustrating. It’s the only seed that haven’t germinated. Either this is harder than I thought or the lemon balm seed I have today are probably too old. So I found Hayefield’s shop on Etsy and purchased some All Gold lemon balm, along with Golden Jubilee Agastache and Variegated Prunella.

I am highly nervous that the pineapple sages that I planted in 2018 aren’t going to return, so I’m trying to source either plants or seed. Luckily one of my fave online plant catalogs, Colonial Creek Farm, has them sale. I picked up two Golden Delicious pineapple sages, along with white anouk lavender, curly mint and pineapple mint.

Last are the impulse buys from big box stores and the local Calloway’s: herbs, pepper plants and tomatoes.

More IG gardenspo convinced me to purchase a garden fork, e.g. spade fork…which differs from the 3-tined cultivator which is usually handy in tilled soil. I have to say I’m impressed with the spade fork, which is tackling the clay soil I’m digging up to redo the stone bed borders.

Got melons and berries in the ground this week, but there are plenty more plants waiting in the wings. Like the Giga Silver Scabiosa I picked up from North Haven Gardens last week.

A quick peek in the seed starting room shows first use of the new heat mat I recently purchased from Burpee. I’m hoping the additional bottom heat will help the heat-loving seedlings like peppers thrive. Of course, I can’t seem to have much success with starting oregano from cuttings. It seems I will have to continue to draw variegated oregano from root stock, at the risk of losing the original parent–because these herbs tend to be very sensitive to root disturbance. 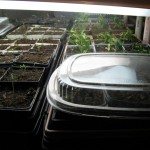 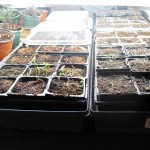 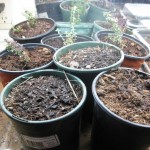 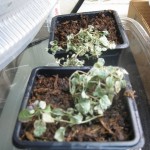 However, despite the dual grow lights my hunny recently installed, I’m not having the miraculous response that I expected. The peppers are still having a difficult time thriving due to the moisture. I need to find my bottle of hydrogen peroxide and spray down the soil to kill any fungus. I’ve also had to re-sow some seeds due to some non-responsive seeds.

The loropetalums are bursting into bloom. First up is the purple fringeflower. We also took some time to flank our newly pruned Midnight Blue rose with 2 small lavender flowered lantana. Hopefully these are the dwarf kind and will form a nice carpet underneath the rose. We also planted our Home Depot petunias (blue, purple and pink) in the border. With any luck, these will thrive and spread, forming a nice lush colorful border during summer. 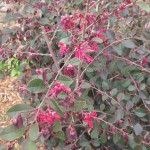 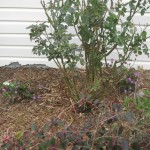 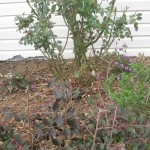 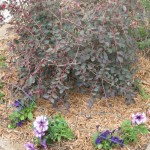 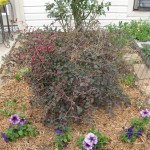 The blue bed is also seeing action. This is one of the most floriferous years I’ve seen Mariposa Skies iris in bloom. By my account there were at least nine buds on one plant. The irises must love this site. I dropped a couple of the creeping phloxes (Emerald Blue?) into this bed. Hopefully these perennial types will last much longer than the annual types I tried last time. 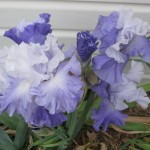 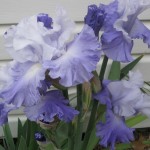 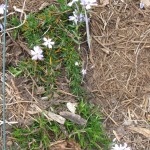 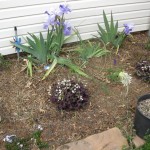 The diascia “Romeo Red” I picked up from North Haven Gardens will fill in the void in the lily bed (I should drop the name since the lilies really aren’t thriving in this bed) while my dianthus cuttings catch up. I find that it’s easier to propagate the red dianthus rather than the white, probably due to the particular cultivar. I’ve also transplanted one of last year’s Chocolate Chip ajuga cuttings I had in a planter back into this bed which will hopefully continue to spread and fill in the border. 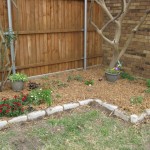 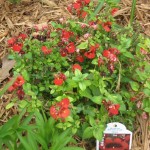 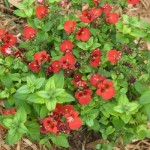 The Oriental Limelight artemisia are bursting back into good health. I found that this particular pot had rooted into the ground, which I immediately moved to another location. The artemisia wilted but I have no doubt it bounce back. I was disappointed with the performance of the Charmed Wine oxalis and the one green shamrock (oxalis triangularis?) in this bed. Both the purple shamrocks have remained woefully stunted (perhaps due to lack of water) while the green barely clung to life. It particularly got buried when I weeded out the bed, dusted the area with Preen and layered with cypress mulch. It remains to be seen if the green will bounce back. But I am happy to report that my Origami red columbine from seed are still hanging in there. Three specimens are still living in the bed, though I have to take particular care to see that do better this year. Maybe some fertilizer? 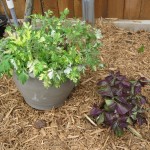 Snapdragons are cool! Literally, they are cold-weather plants and love this chilly early spring air. I think I will have to remember to plant them in boxes again next year so that I can look forward to late winter color. I believe these are the Montego Sunset snaps that I purchased from Stokes last year. They sat unmolested and heavily mulched in the blue bed after I had given up on them late in the year, only to have dug them back up late fall early winter and placed into a box, thinking they were a salvia sport. Joke’s on me. It’s been a real joy to watch these colors progress from rose pink to sunset orange. 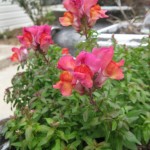 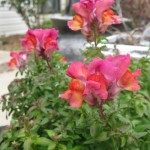 Much work went into the new veggie garden. I planted spinach, eggplant (Bride), arugula, gai lan, cilantro. I also transplanted some of the silver lemon thyme (which had reverted back to solid green), dropped some catgrass, Alaska nasturtium and common chive seeds in the cinderblock holes. Did I mention the leek cuttings also went into their new home? Next week I plan on adding the asparagus to the bed, after I decide on where to place them! 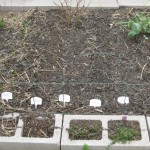 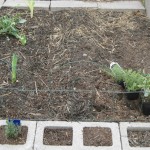 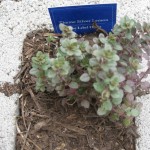 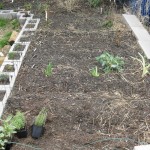 I’ve got seeds…and things! My trip to North Haven Gardens and Home Depot yielded some impulse buys. I was hoping to find some good herbs and ornamental pepper seeds; NHG didn’t have the ornamentals, but I did find elfin thyme (red/pink) and silver lemon thyme.

The curcuma is an interesting tropical flowering plant from Thailand. It love shade so I imagine I will be planting it in the shade garden along with all the other tropical plants. I do hope my ginger lilies come back.

Asparagus! I need to get the asparagus planted. Instructions state that it’s a perennial. I can’t wait to dish up this veggie. 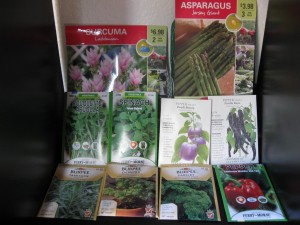 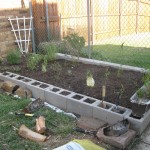 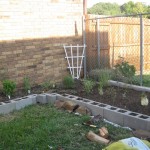 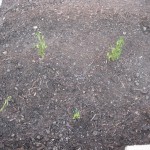 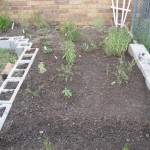 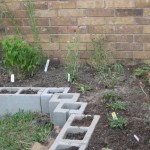