We’ve had a spate of mild weather lately, until last night when a hail storm struck, damaging tender young plants. Some vinca seedlings I had sitting out suffered the most damage, but most other plants will recover. Unfortunately, there’s a lot of debris strewn about the yard caused by the hail storm, so a cleanup will be on the gardening agenda this weekend. 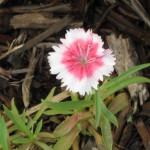 I have express my dismay upon discovering that the Diana Blueberry dianthus blooms weren’t even blue, lavender, or some shade reminiscent of blue. All the dianthus sitting in the blue bed are opening pink, or picoteed pink. I’m beginning to suspect that these Blueberry dianthus are the Super Parfait Red Peppermints that I thought perished last year, but those were supposed to be RED!

I am concerned with one of the variegated felicia specimens planted next to the fence. It appears to be dying; the honey says its probably due to lack of sun, but I can’t imagine that might be what’s ailing it. Another fence hugger, our Frostproof Gardenia, has been curling up and dropping nearly most of its leaves, and there’s been no sign yet of any new foliage. I’m sad to say that it is probably due for replacement or relocation.

There are few garden shows to see this weekend. Calloway’s is hosting their Rose Festival and sponsoring several garden tours this month and next–Southlake being the first of the series. NHG has their daylily sale, and Argyle Acres opens their Iris gardens to the public.

Speaking of roses, we’ve determined the yellowing on the nether parts of our Midnight Blue is attributable to too much watering. We’ve cut down on the moisture and it is retaining its blooms longer. The neighboring purple salvia greggii echo the colors of our Midnight Blue. And now the gauras planted next to the house are getting in the act, starting to put forth blooms. I need to plant the ornamental peppers in this purple bed to get them going.

I adopted out some herbs and pepper plants yesterday; and now I’m in the mood to plant more–even though I have zero room for them. I suppose I should try to coax more Lime Basil plants from seed–my first two attempts at early hardening seems to have killed the youngsters. I’d also like one regular basil plant, which I will perhaps keep potted. I’m also seriously considering onions and garlic, plus fostering some more hostas.

I will also need to start more vinca, since I find that I’m not producing enough.

And who knew that Coppell had its own nature park?