There are currently 2 rosemary specimens thriving in our garden. Both are unknown cultivars. The first rosemary to succeed (after a failed attempt with a Tuscan Blue grown in the purple bed)  established itself  in the herb bed. Purchased from Home Depot, it had no specific cultivar tag that I noticed. It was simply Rosmarinus officinalis, plant code THDA4945, mentioned to grow up to 48″ tall and 24″ wide. The plant has nearly doubled in width since planting, though I have tried to keep it trimmed back to maintain a neat habit. It did survive our extremely icy winter this year, though it displayed some frost damage on its leaf tips. It also put on new top growth during this spring. Needle leaves are blue-green with a silvery gray underside and its aroma is characteristic of all rosemaries, with a faint touch of pine. I have not had an issue with tough needles; this rosemary yields to cutting and chopping, wonderfully flavoring any dish I’ve used it in.

The second rosemary was a Christmas tree topiary we purchased earlier this year. Despite losing nearly 3/4ths of the plant to die back during the winter freeze, much of it recovered by spring. We left it untouched, unpruned for much of the winter, hoping it would come back. Because it was carefully pruned into shape, its foliage is very short and fine. I consider the leaf color closer to a bright green with a hint of lime. I’ve found some references indicating that Tuscan Blue rosemary are ideal for topiaries, but this specimen doesn’t have the characteristic dark green leaves of that cultivar; nor has it ever flowered. I suspect that the very fine foliage is closer to that of Foresters Rosemary, another cultivar I’ve read about that is suited for topiaries. It may also be an Arp, well known to endure harsh winter conditions. 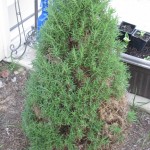 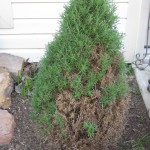 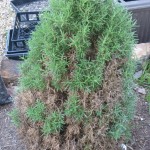 I would love to someday plant a rosemary hedge and be available to walk by it, while releasing its perfume into the air. However, our current planting conditions prohibit anything so large scale. I think having 2 rosemary plants should suffice; though if I ever spot one, I would like to snag for my wishlist a variegated rosemary, either Gold Dust or Silver Spires.