Turns out the stump grinder last weekend shattered the existing sprinkler line running perpendicular to the bed. This set back our weekend plans of installing a cinderblock bed. We effected repairs on the exposed pipes, which hopefully will be ready for burial this coming weekend. 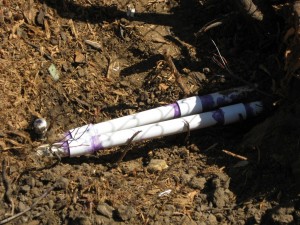 A mystery wire also got severed during the stump grinding, which we still haven’t been able to identify. This makes for 3 unidentified cables that we unearthed in the removal of the old photinia.

Since we experienced lovely weather this weekend, the man and I undertook the task of tree stump removal. We hadn’t really touched the beast since the end of January, when we took a chainsaw to it and cut off most of the top growth.

It was sore, sweaty work. The weed tree flanking the photinia came out easily after some digging and chopping. The man had started digging around it last week and I completed the job on Saturday.

The photinia presented an enormous challenge. Barely 30 minutes into the digging, we hit a hidden sprinkler line, which suspended our work. We made an emergency run to Home Depot for a repair kit and to buy new tools: another shovel and a 1.5lb hand axe. With most of the daylight gone, we resumed on Sunday and labored to excavate most of its rootball. We found many roots that had grown into the sidewalk and under the fence and concrete divider. We also encountered more hidden cables which was deeply entangled in the roots. About 3.5 hours of hard digging and hatcheting later, it was clear that the photinia stump was not coming out. A mass of roots held the stump suspended over the hole we dug around and underneath it, and those arterial roots grew horizontally behind the chain link fence into parts unknown. It had also deeply entangled another weed tree in its roots, right next to the fence. 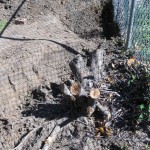 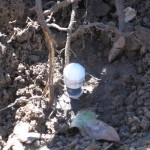 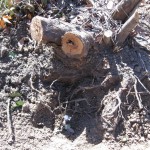 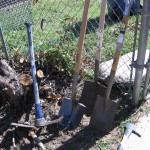 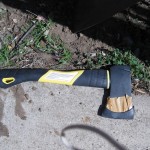 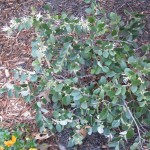 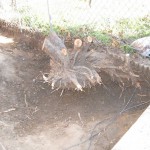 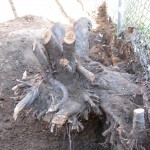 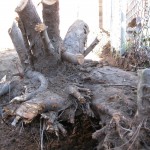 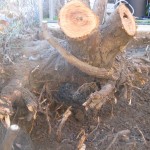 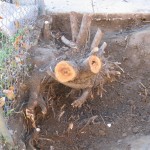 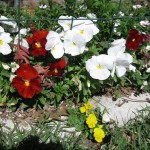 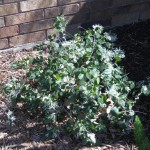 Spent Sunday afternoon raking leaves and managed to snag 3 bagfuls from the front yard. Too bad we don’t have a compost bin to utilize the debris…though I may have found some 3×3 wire bins on AceHardware.com. The man started hacking down the photinia. The plan is to install a bed where it currently sits and perhaps put up a barrier on the other side of the chain link fence. Preference for plants would be any shrub that isn’t established too close to the fence. The black spot-ridden photinia was an aggressive grower that grew through the links of the fence. 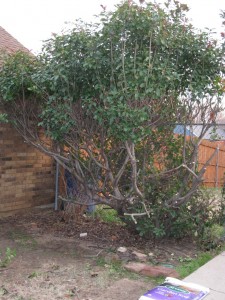