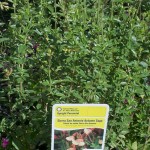 I went plant hunting at the Frisco Lowes and made an exciting find from my salvia wishlist: Sierra San Antonio! This was the salvia I hunted at NHG for…what amazing colors. The first bloom showed off a dark purple throat behind a pale gold tongue. The habit is strangely-tropical looking: the lanceate leaves are glossy and have veining similar to a microphylla. It’s actually a cross between greggii and microphylla, and the taxonomical name given is Salvia x jamensis. This specimen has a short woody trunk, but all the new stem growth is shiny like the leaves. I hope that it will endure the summer heat.

August. Hottest month of the summer. It’s only natural that plants who haven’t had time to harden off succumb to the high temperatures and dry conditions. Among the lost: 1 white plumbago, 1 thai basil, at least 1 ornamental pepper plants, rosemary, spanish lavender, at least 3 salvia greggii, 1 catmint, 1 coneflower, several instances of dianthus, 1 or 2 phlox, 1 ageratum, 2 dahlberg daisies, 1 or 2 white cosmos. The salvia greggii failed due to what appears to be a broken sprinkler head and an overzealous weed whacker.