My shopping spree carried over into Sunday, but I didn’t spend as much time as I did Saturday. After all, plants don’t plant themselves (at least, not very often in my own garden).

I did head out to Lowes and Home Depot again, looking for bargains. I ended up with 4 pots, a 9 pack of ornamental kale, and a bag of tulip bulbs, Happy Generation. I know, I know…I just can’t resist those bulbs. And where did I end up putting them? In the front yard bed. That gets a fair amount of water, on and off season. Ah well, I will content myself with tulips being annual…but I’m hoping for a decent show next spring.

So it ended up being sore work Sunday afternoon. Fifty pansies, 36 violas, 30 giant grape hyacinths (Bellevalia pycnantha according to my American Meadows order), 18 tulip bulbs, 6 fall crocuses (Wild Saffron), 9 mixed ornamental kale all found a home. I relocated the 2 Stella de Oro daylilies in the front door landing strip, along with 2 struggling Silver Dust dusty millers. I also tore out the 2 Confetti lantanas flanking the Autumn Monarch azalea (which happens to be blooming quite profusely at the moment) and took cuttings in hopes of overwintering them. Did I mention one of those Confettis had a root as long as I was tall–we’re talking at least 5 feet long! Last, but not least, I also relocated the Seabreeze salvia into the front flower bed.

Next, I spent the rest of the afternoon re-potting pepper plants and hostas. I managed to dig up the struggling remains of the Wide Brim hostas from the shade bed. They were unsuccessful in the bed due to the constant slug onslaught and too much sun exposure. I also got my Francee hosta roots transplanted into their own pots. The Gold Standard and the Minuteman hostas also moved into larger homes. In addition, nine pepper plants also received new homes; unfortunately I’m at a loss at identifying them at the moment. I think the doubled up pepper plants are the Thai chilis. I should have the Jupiter bells, banana peppers, and Fresno peppers surviving from the July starts.

Back and backsides are sore…it comes out of hunching over on uncomfortable bags of sand, while carefully replanting things. I’m still sore just thinking of it. But I have some basil to take indoors with me during the winter time: Pesto Perpetuo, lime basil and classic Genovese basil.

Hey, at least I’m in the spirit of autumn now. I’m referring to the pumpkin display decorating my front porch.

Why is it I can’t seem to successfully photograph the Moonglow salvia greggii’s true yellow color blooms? 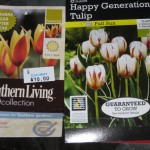 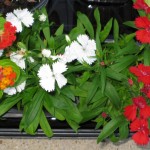 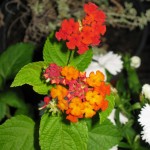 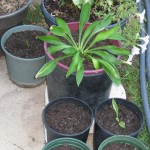 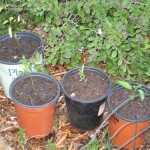 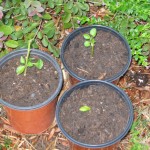 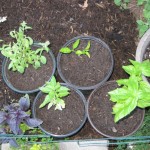 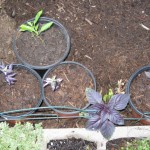 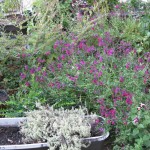 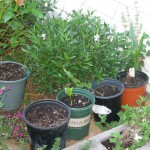 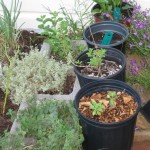 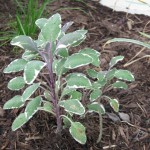 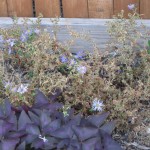 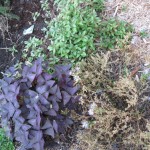 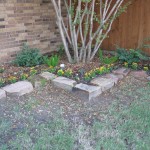 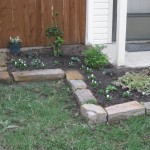 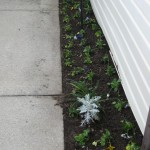 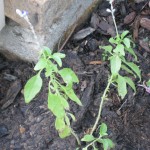 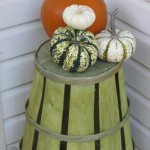 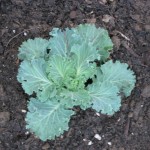 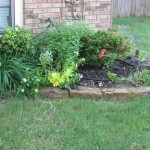 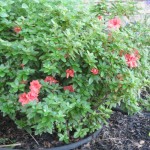 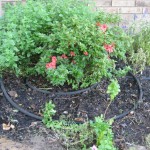 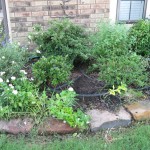 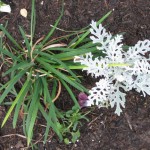 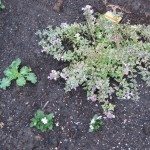 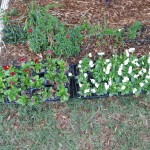 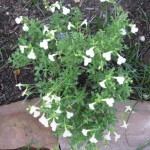 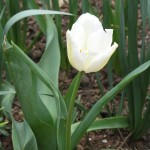 Here’s an old tulip making a comeback this year. It came as a pleasant surprise to see several tulip patches coming up this year, and this one seems to be perfectly situated in my blue-and-white garden. Photo was taken mid-morning before a follow-up furry tornado whipped through the S1 bed and trampled some of the hapless daffodils. Sometimes being a dog owner and gardener makes for a disastrous combination.