The last set of a 10 set squat pyramid. Truth be t

Foster kids just hanging out together. Now that th

Our foster kid turned foster fail, who at the vet

Our goofy foster Dane. He is ADOPTABLE! He's got p

My new ride thanks to @familytoyotaarlington. Gave

The last time I've had shrimp as tasty as this was

Guess who graduated Manners 1 class? Rocci will b

Got this new elevated bed for the big girl. #grea

The only cat in our household that entertains hims

Happy to report a @capriottis opened closer to hom

Just a reminder I'm not an everyday-pizza eater bu

My Stokes seeds order arrived. It had probably been sitting in the mailbox a few days before we finally got around to emptying it. Since something had been digging up the tree ring bed, L had to replant a few uprooted marigolds so proceeded to sow the cosmos anyway. The first wave of cosmos seedlings are of course up and growing, some faster than others. I’m hoping at 500 seeds a packet, the tree ring will now get full coverage on cosmos. Now if the Ladies in Red will start blooming already. I’m beginning to think that starting them from seed so late might have been a mistake; but impatience isn’t a good trait for a gardener. I’ll have to satisfy myself with the coral nymph blooms for now, although I’m worried they’ll overrun the other salvia. I’d also like to get that outer ring improved with the remainder of the marigold seedlings and thyme cuttings, but they’ve been slow to propagate. I might have to take some golden oregano cuttings to add to the tree ring. 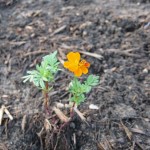 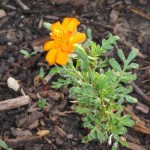 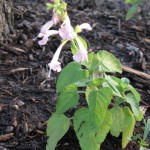 The hostas getting afternoon sun are taking a beating. All three varieties has suffered some damage. Combined with the daily buffet assault, they are half their foliage since spring. Even the supposedly sun-tolerant Gold Standard hosta isn’t able to withstand that grueling afternoon sun. I am thinking about installing some sun-friendly perennials in that corner of the shade bed to see if it will provide some relief. But can a sun perennial survive there given the brief afternoon exposure? 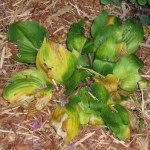 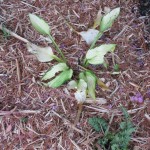 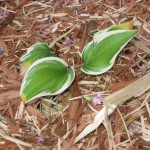 What’s up with all these ornamental kale? They’re about 2 feet tall now; they seem to like the mostly shade front door bed. Our poor gardenia, still struggling all these months, is making the stand of kale look bad. Of course, the dried out pansies are doing a better job of making this bed look unkempt. I need perennials in this bed, getting weary of switching it out every season. 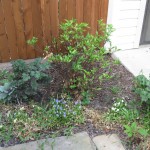 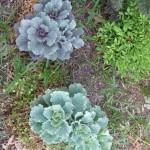 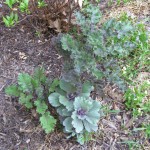 Check out the chili pepper–it’s loaded with blooms. I expect a good harvest of chilis from this thing. The cinderblock herb garden is filling out nicely, while the purple bed is starting to look overrun. I need some ornamental black peppers in there! I wish my seedlings weren’t so puny. 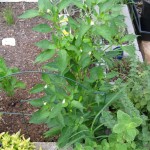 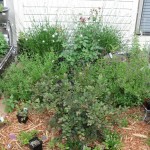 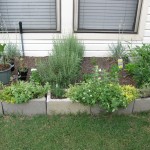 More of my petunia seedlings are blooming….but what’s the deal? Are the rest of them purple??? I was expecting to see at least one red seedling, but so far I’ve seen one white and nearly half a dozen purple buds. So much for my patriotic planter. At least the caladium is looking good, even if one of the leaves appears half eaten. 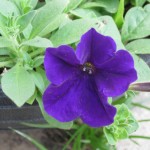 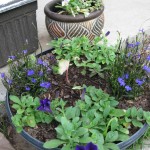 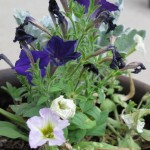 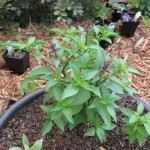 The thai basil is flowering. I really need to snip it down to size…they are making the other basil look puny. They look lovely with their red-purple stems and bud crowns, but they seem to outgrow the other basil. Very much suited to our hot Texas summers. 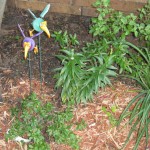 And here’s what’s left of the azaleas in the lily bed. I kept the dwarf gumpo white and the Hot Shot red azalea. The gumpo azalea didn’t produce any blooms this year, whereas Hot Shot produced a handful. Is this typical of $2 shrubs? The gumpo gets one more shot at impressing me next year; otherwise it’s out of there. I did like that Hot Shot came out of the winter with dark maroon foliage before it lightened up by the end of spring. I must remember to keep the neighboring Hot Lips salvia pruned back to give the azalea some more light.