Thank the elves, Santa brought me some fitness gea

Here's a sneak peek at my DIY grow station, plant

Wednesday 8s. Thought these were gonna suck, but I

I couldn't believe my eyes when I saw the new leaf

Crazy for croissants month continues. This time it

I cooked up my own spicy pork belly sisig from lef

The only Christmas lights going up at our house ar

So excited to see this cauli noggin. This one is c

Some days, Flash uses Conan for a punching bag. To

Who wants pork belly? I'll be feasting for days wi

The week started out crappy because I had to go in

My fingers got a workout over the post-Thanksgivin

This error message is only visible to WordPress admins


Error: API requests are being delayed for this account. New posts will not be retrieved.

That time of year again when all the remaining plants you had left on your to-do list finally get planted. Since the temps in North Texas warm up in the vicinity of 100, anything not in the ground tends to bake in their thin plastic pots. I got around to planting the rest of the Purple Star verbena, the majority of the ornamental pepper seedlings, felicia, tricolor sage cuttings, leftover marigold seedlings, and a few of the lemon thyme cuttings. And because I couldn’t bore a hole in my last ceramic pot (a freebie from Kathy), I had to transplant the Aztec red verbena, a dusty miller and the last red-eyed white vinca into a planter box.

I spent the day ducking in and out of the heat, clearing debris and dried out plantings (leftover violas), trimming vigorous plants (zealous Thai basil), and weeding wherever I could. In some places like the tree ring, I tamped down loose and exposed plantings and filled holes dug by industrious squirrels. Tons of the cosmos seeds are coming up now, and I am waiting eagerly to see the results of this week’s cosmos sowing.

While gardening, I made some exciting discoveries. The one remaining thai chili pepper is bearing fruit. It had been flowering for the past week, and today I found 3 fruit on it, with several more nubs showing. 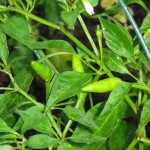 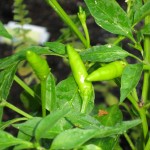 A couple more of the vincas have bloomed; one from my February starts, while another from the outdoor starts. Both seemed to be in the pink color family. Several more vinca seedlings are already budding, including the two I left in my planter box. The neighboring Confetti lantanas have nearly tripled in size since planting, as well as the Purple Star verbena which get the most exposure in the front yard bed. 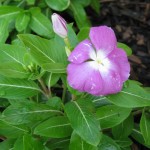 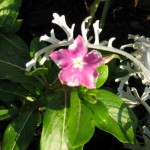 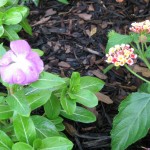 The daylilies are still flowering strong. An observation I made of the front bed Dallas Stars is that they are a good 1-2 feet taller than the Dallas Star in near-full shade. Still a no-show however is the Hyperion daylily, though I did notice it had a single scape on it. Whether it had already bloomed or planned to bloom is a mystery. 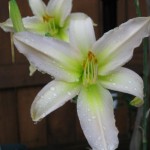 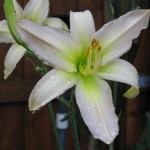 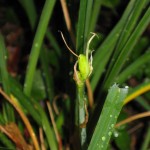 I’m so disappointed that none of my home-started Easy Wave petunias are red. I was hoping for a patriotic planter bowl for the Fourth of July, but currently everything in the bowl is either blue or white. I expected at least 1 out of the 10 seeds I purchased to be a red petunia (I sowed 9, and 8 are currently planted), but it seems that this wasn’t the case. Next time I plan to purchase the colors separately–and yes, I will grow them again since they were relatively easy to start and grow as it warmed up. (Just keep them covered during the first month as tiny seedlings.) 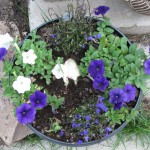 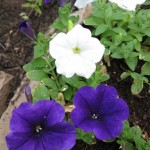 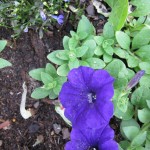 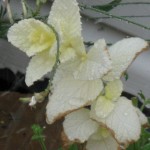 I hacked down a lot of the wildly growing pineapple mints and hot & spicy oregano. A shame I didn’t get to use most of them, but right now they are strictly ornamental. I have to wonder: if I took a purely cream-white cutting of the pineapple mint, would it continue grow white or will side shoots revert to green or variegation? I’m intrigued because despite the heat, this solid white shoot remains happy, if a little crisped on the edges.