The hair down thing didn't do much to disguise my

Troubleshooting requested. What's wrong with my...

I hate renegade rows because they hurt my wrists a

A near-ground level view of my front yard flower b

When you have a crappy back and arm sesh and your

When you're laundering your delicates and find a #

Skipped a couple days of weight training but got s

What the heck? Found three pockets of this ticksee

Boom, and then it got hot and humid outside. Dou

Werkit Wednesday for shoulder and chest. Had some

Senior puppies need their sleep, even with a treat

Here are the recent bloomers in my mixed border da

It's been a couple of weeks since I was @growdesot

Yes, that stuff falling out of the sky in buckets is rain. After more than a month without it, it almost seemed like some landscape on an alien planet as I watched it pour all over my garden. What a relief! The patchy brown bermuda grass lawn will love this, and everything that needed a drink will get a good soaking. Timing is everything…I had just installed a soaker hose in the front flower bed this past weekend. Those azaleas need some serious help. 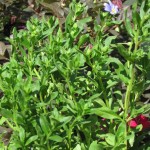 Uncommonly cool May temps (66 degrees!) has persuaded us to putter in the garden all day yesterday. After paying a visit to nurseries and big box home improvement stores, we brought home several bags of topsoil, compost, landscape mix and garden soil. I also managed to find the first of the season’s Cape Town Blue felicia at Home Depot. It seems this Carrollton location always keeps a good stock of “Proven Winners” plants. This year, I plan on aggressively taking cuttings from the felicia for experimental rooting.

With the tree ring weed matted, we proceeded to put down 4 bags of topsoil and 2 bags of landscaping mix. I then proceeded to plant out about 4-6 of the coral bicolor salvia coccinea and 4 of the Lady in Red salvia coccinea. Incidentally we saw flats upon flats of these Ladies in Red at Strong’s Nursery yesterday, and I couldn’t help but notice how much yellower the foliage is.

I had a brilliant notion to border the tree line with variegated lemon thyme cuttings. I am thinking that will keep the invading grass and weeds at bay as well as maintain a perennial border in the ring. I hope to take several cuttings and give it a try. I was also thinking of purchasing a weed preventer granule like Preen to keep the weeds suppressed until the plant ring is established, but I’ve read using it produces mixed results at best. 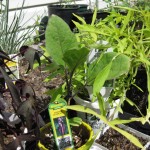 With the extra garden soil and with the help of the man, I’ve filled out the remaining holes in the cinder block border of the herb garden. The variegated oregano now has a home, and it’s just a matter of time before planting out the rest. I do have some concerns about the lone Chinese eggplant we obtained last week; it can grow up to 4 feet high, and I’m not sure that our herb garden can support such a large plant.

I also gave the shade bed hostas another heavy dusting of insect repellent granules as well as full spray coverage with the Bayer Advanced system. Much of the Wide Brims have been decimated by pests. Luckily the Prairie Sky hosta is so big and thick that the pest damage is much less evident on it. The Gold Standard hosta also rises higher above the ground and tends to sit out in more sun than the neighbors, so the damage is controlled there.

The first and only Dahlberg daisy that I’ve successfully cultivated indoors is now outside with its 4 other companions. Apparently there wasn’t much of a root stock and it became a disintegrated mess before planting. But I hope to see it do well in its new home.

Finally my man decided to overseed the ugly brown patches in the front yard with a package of Scott’s waterwise bermuda grass formula. He went a little crazy because he managed to empty the package before he could cover up all of the bare spots. I also pointed out to him the unlikelihood that some of the shady areas he overseeded would see any growth. He’s optimistic however, since he did all of the work.

The winter lawn looks abominable. Evidence of irregular watering throughout the year shows up in bald patches and weed farms all over the front and back yards. Weed and feed came late this past year, the man laid down the fertilizer in December.  I am wishing for the perfect green lawn in 2011…but it looks like we will have to wait till spring to work on this. Meanwhile, everything from henbit, thistle to nettle weeds are growing. Thanks to this weed identifier, I now know the names of the enemy. The Bermuda bible will give us a leg up on the competition as well. Meanwhile I am thinking about investing in spot weed-killers.

A good general knows when and how to turn the tide of battle in his favor.

Armed with the recipe for a DIY insecticidal soap, I resolved to reverse my fortune on the garden battlefield and take action against the whiteflies destroying the coleus and the young hosta. I had a leftover 5 gallon plastic jug used to store raw garlic. I then combined 4 cups of water and 2 tablespoons of generic brand lemon-scented liquid dishwashing soap in said container and began shaking. Once it reached a frothy consistency, I grabbed a used Febreze spray bottle which had been doubling as my seedling spritzer, emptied it, and poured my secret weapon into it. Into the cool morning I marched and started spritzing the ravaged coleus. It seems that only 2 of the survivors were hardly affected, perhaps because of their longer exposure to sunlight. But they received the full bath, as well as the 2 Gold Standard Hostas that had been sitting in the bed. The hosta in the back (again, one that does not receive any sunlight) had been targeted mercilessly, having lost most of its new leaves to the attackers.

I surveyed the lawn to see if my previous day’s efforts had taken root. I had tackled the issue of the raggedy, browning lawn and turned loose the broadcast spreader. With a bag of Scott’s Turf Builder Bermudagrass Seed, I overseeded the front and courtyards with seed, in an effort to eradicate the patches. I realize that my efforts might be hampered to the amount of dead and tall grass, plus any hard soil that had not been previously raked. But I was resolved to get the task done and perhaps reseed at a later date in May to patch any remaining holes in the lawn. Let’s see if that 85% germination rate claimed on the label comes true! 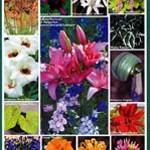 It’s that time of year again when online and mail-order nurseries bombard the mailbox with their colorful harbingers of spring: the plant and seed catalogs. As usual, they are full of picture-perfect bouquets and irresistible plant collections, not to mention time-sensitive and money-saving offers, in an attempt to get gardeners to open their wallets. Nothing like a slew of full-color catalogs to get me started thinking about flower beds and landscaping.

This year DH and I are committed to restoring the backyard to some semblance of a grassy lawn. DH and drought had effectively killed off most of the Augustine, though some of it has eked out an existence hiding in the lea of our house and under the fence’s shadow. We hope to seed some bermuda, water restrictions permitting, this spring in order to spare ourselves from a mud-stained carpet. Three pups can track in a lot of dirt and mud, among other things.

The tulips and muscari I planted over November and December last year have sprouted, and thankfully, weekly showers have dampened the ground to sustain them. I haven’t determined if any of the alliums have burst through the ground. I hope to have some time this coming weekend to assess the flower beds.