The Dallas Arboretum was packed this weekend, so much so that we had to circle the place looking for parking. But it was definitely the place to see tulips and azalea during the warm spring weather.

We headed out to Home Depot, Lowes and Strongs as well to pick up some variegated society garlic, 2 Palace Purple heuchera, 2 Wide Brim hostas, 2 Charmed Wine oxalis and several bags of mulch, compost, humus and soil. The honey finally got his rose planted in time to see its first bloom. However we have concerns with the leaf yellowing on the lower extremities of the rose bush.

We got about 6 bags of pine bark mulch in the salvia bed, after I had toiled last weekend putting weed block fabric down. The 2cf bags of pine bark gave enough coverage on the bed, much less bags used compared to shredded mulch. However, I am concerned that 2 of my red salvias are ailing–in fact, looking like they are dying. I suspect they may have received lethal doses of weed killer in previous weeks. I am crossing my fingers that they will survive (they survived sitting in a pot for almost 2 years). Luckily, I have volunteer cuttings ready to replace them should the need arise. I also need to work on getting the Crimson Pirates into this bed…they’ve been sitting on the kitchen table too long.

It’s been exciting to observe the changes happening in all the beds. The blue bed is perhaps the showiest at this time. The yarrows form a verdant mounding backdrop to all the color coming in. The purple oxalis are beautifully robust (and flowering), the violas in full bloom, and the scabiosa gangly and flowering as well. I should remember to deadhead and collect scabiosa seed if possible. I’ve placed the 2nd sinaloa sage into the bed, along with the two variegated felicia. While working the bed, I discovered 2 phlox starts growing up against the rocks–one had a distinctive, pale blue flower that I remembered. I dug them up to grow them indoors, in hopes of that the weed killer wouldn’t affect them. Now I am just waiting to put Sea Breeze salvia seedlings into the bed.

Speaking of seedlings, nearly all but the columbines that I seeded last weekend, have sprouted. Speediest out of the gate were the marigolds. Everything else has followed suit, save for the columbines–which take a few days more than usual. Those petunias and ice plants are particularly tiny! I will need to remember to keep them under the dome a little longer than the others. I’m also happy to report that planting the garlic chives thickly and keeping them covered with a humidity dome has produced favorable results. Now I just need to sow more garlic chives. Since I emptied out our bathroom nursery, I have a little more counter space to work with. But first I have to work on getting the previous wave of seedlings potted and placed outside. The basil seedlings also need hardening off; with the warm weather, it’s time to put them outside. I should sow more of the Red Rubin basil since they will look good in the purple bed. I forgot that I had some Lime Basil seeds to sow as well.

While I’m on the subject of herbs…the herb garden sits still unfinished. I’ve only planted the lime thyme and the golden oregano in the cinder block border. I have yet to move the other oregano, thymes, and pineapple mint. Those herbs planted from last year are now cozy neighbors, jutting up against each other in the corners of the bed. I’m reluctant to move them now since they look so good together, but it’s only a matter of time before the pineapple mint takes over. The rosemary suffered some frost burn this past winter, but there is evidence of a lot of new growth on all of its branches–so I imagine it is doing quite well, unlike our rosemary topiary. I am considering installing the lavender in the herb garden’s back row.

The shade garden in front gathered the most newcomers this weekend. I added one specimen of the Gold Standard hosta, the 2 Wide Brims, and the 2 Purple Palace heuchera. I’m also excited to see that both of the foxtails have prominent plume shoots above ground, and the japanese painted fern in back has also sent out several fronds. The golden hakone grass are back this spring, showing off vibrant citrine yellow blades of grass–really brightening the area. The honey put down several bags of black mulch, which is punching up the color of the new additions. I am hoping the tiger lilies give us a show this summer; in the mean time, I am still debating on what border plants to add to the bed, aside from impatiens.

The front flower bed was the messiest to begin with; overgrown with weeds and in dire need of cleaning and shearing. Most of the vinca remains have been removed, the coreopsis and salvia have been trimmed back and general maintenance performed. The centerpiece loropetalum is stealing the show, drenched in countless white fringe flowers. I am thinking that the nandina flanking it need to be pruned into a rounder shape sometime in the future. The Victoria blue salvia that I’ve left in the bed are sprouting at the roots; so I’m glad to have left them in this bed so they can come back. The compact white ballerina gaura has grown back in force, nearly a foot high after I cleaned it. However, the pink gaura (Cherry Brandy and Passionate Blush) aren’t as vigorous, only still crowning at this time. I took some cuttings of Passionate Blush in hopes of propagating it. Sadly, neither the hakone grass nor the kangaroo paw have made a reappearance in this bed and are most likely victims of our vicious winter. I’m still crossing my fingers that the kangaroo paw may come back.

The only decorative bed in front is the gardenia bed, bordered by kale and viola. Sadly, this winter may have taken a toll on the gardenia; much of its leaves are pale, dry and look ready to drop. We have to take care not to overwater it, but I’m not sure if it’s going to survive another year. It is truly ghastly. 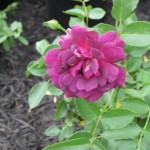 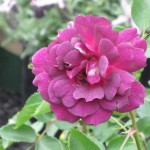 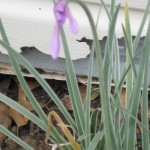 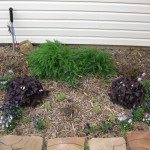 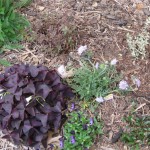 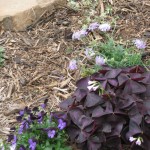 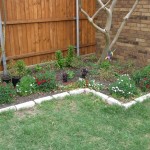 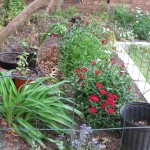 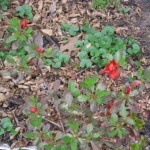 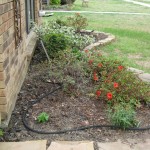 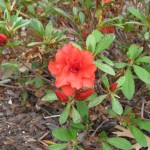 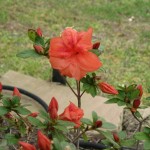 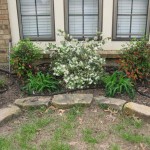 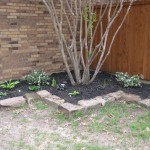 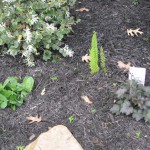 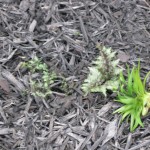 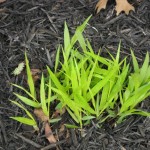 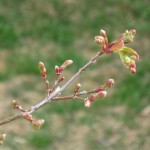 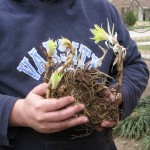 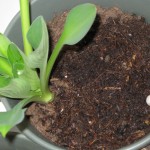