I plan on populating the new garden bed cinder block wall with oregano and thyme cuttings. I divided the newest thyme (elfin) in 2 and already planted them in 2 blocks. I took golden oregano, variegated oregano, variegated lemon thyme, and lime thyme cuttings yesterday. Oregano, especially the golden variety, tends to be a very tricky plant to take cuttings from, since they are very sensitive to disturbance. Both the mother plants and baby plants suffered serious wilt. I decided to bring the cuttings indoors and keep them under artificial light. I’m not sure that the golden oregano will make it. The variegated oregano had tiny white flowers when I divided it; unfortunately, the mother plant is not doing so well. The cuttings however look as fresh as the day I took them. Too bad I can’t grow these things from seed.

I did take some verbena cuttings as well. I have one big mother specimen that survived the last two summers that I’d like to increase. The purple bed looks especially lovely because of them. 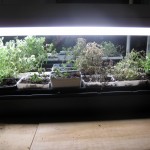 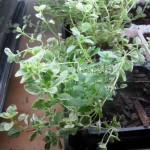 I decided to sow my Toy Choy and Guy Lan seeds today. It’s about the right time of the year for the fall harvest season. I hope I get to feast on Chinese broccoli and baby pak choy  this coming October. I also started Bride Eggplant and Red Rubin basil indoors. I need some ornamental pepper seeds to grow in time for the October/November holidays.

On Monday, I got around to sowing some seeds in Jiffy 7 pellets. It was just my luck that I started with the super-tiny seeds while I had a cold from the morning jog. It took all my resolve not to sneeze while I was planting these near-microscopic seeds: Angelonia  Serena Blue, Snapdragon Bronze Dragon, Snapdragon Montego Sunset, Wizard Mix Coleus and last year’s Origami Red & White Columbine.

Some time last week, I also took some cuttings of the Chocolate Chip ajuga which have been merrily putting out new growth in their temporary pots; as well as cuttings of lime thyme and variegated lemon thyme. The original parent lime thyme was especially vigorous and overflowing in its cinderblock space. Amazing fragrance this little herb has. I was using it to give the pups a lime thyme herb brushing.

This morning I planted 3 leek roots (from this weekend’s Spring Soup recipe that called for spinach, asparagus, and leeks) in the herb garden. Even while it was sitting in the fridge all weekend long, new roots began to appear. From what I read, leeks are vigorous perennials, so I am looking forward to watching them grow.

No pictures today; the red and white pansies are blooming, as well as the purple loropetalum and the various dianthus in the lily and blue beds. The Valentine dianthuses are especially pretty now that they’ve had a full year to grow into their new spots. The remaining three Valentines sitting in the blue bed will have to be moved, perhaps in the front yard bed to complement the coreopsis. I do need to find out if I can divide those winter coreopsis.

Flax and marigold seeds to be popping up here and there (blue bed and tree ring). I have yet to see if the viola I sowed last month are coming up–so far no evidence of them doing so. I’ve got three Sorbet viola seed packets that I’m still deciding on–most likely I will attempt to sow them indoors. The sweet alyssum Pastel Carpet will be sown outdoors–another attempt at trying this–while it’s still cool which will hopefully give them a better start.

Still have zinnias, gomphrenas, and eggplant to plant. I will wait on planting them mid-March since they are typically warm weather plants. However I should get around to planting the Chinese broccoli and baby bok choy as soon as our new veggie bed is laid out. Problem is: when? Two tree stumps are undermining our efforts to prep a new bed.

From Parks I ordered the following:

Well, I also had hoped to throw in some onions in there, but it doesn’t look like we’ll have much success digging out those tree stumps any time soon.