I brought indoors all of my potted tender plants Thursday night in advance of the cold front that hit us. The big potted ginger lilies didn’t join the others in converted bathroom greenhouse, since I had taken up all of the available counter space. For about next 4-5 months, these plants will be hanging out here in relative safety. 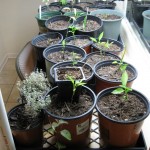 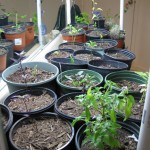 I really need to snip off that chili pepper bloom head. But then again, I think all the young pepper plants could use a trim to encourage more foliage. Not so with the new hostas leafing out. 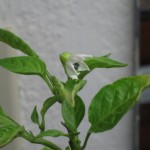 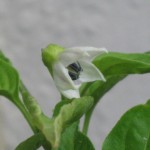 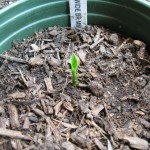 I took a cutting of the groundcover salvia sinaloensis, or more commonly known as bicolor or Sinaloa sage, when I trimmed them back earlier in the week. This salvia is unusual in that it hasn’t turned woody and that it spreads via runners. It competed against an aggressive yarrow and has managed to hold its own, with a little intervention. The electric blue blooms have been disappointingly sparse and sporadic in its current part-sun location. It’s better valued for its foliage though; it has distinctive purple-tipped leaves on new and fall growth. 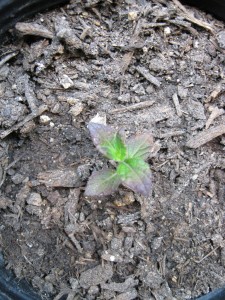 I do need to move some of the pots into the bathtub, to make room for seed starting flats. Saturday morning, I collected 3 sandwich baggies of seeds from the Cosmic Yellow Cosmos, Durango Marigold Red and Durango Marigold Bolero. 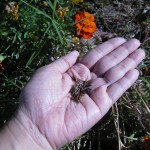 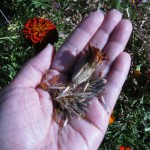 The Durango Marigold Boleros tend to bloom on the smaller side compared to the standard marigold colors. 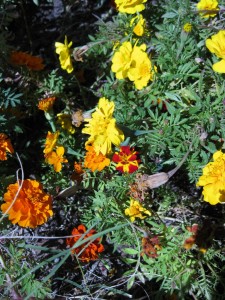 Sadly, I didn’t collect any Cosmic Red cosmos seeds or Lady in Red salvia coccinea. The red cosmos was nowhere in sight, while I didn’t have much luck finding seeds of Lady in Red still on the plants. 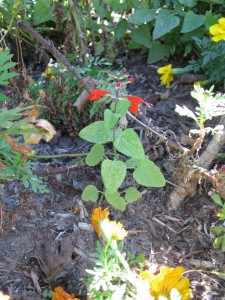 So I cleaned up the leaf-burned foliage with fabulous results. Next I’ll have to find a new home for them! 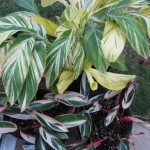 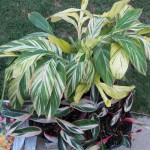 Doogie decided he wanted to pose for me so I couldn’t miss this opportunity to photograph a spotted dog against the striped foliage. 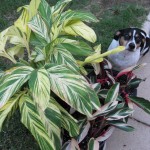 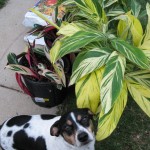 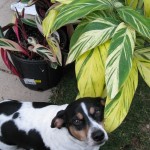 I couldn’t resist this eye-catching succulent planter when I wandered over to Flower Mound and visited Westbrook Outdoor Solutions, a family-run garden center. I tell ya…I need a new camera with better flash. Or I need to stop taking pictures during dusk and dawn. 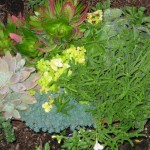 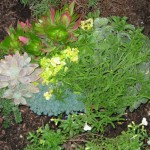 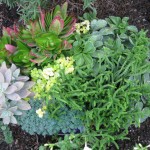 Finally, one (albeit poor) shot of the new ornamental kale still looking for a home. 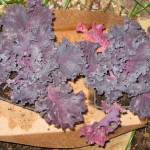 Last week while I toured the nursery centers in search of pots and plants, I happened to notice these ginger lilies beckoning to me from the 75% off clearance racks at Lowes. 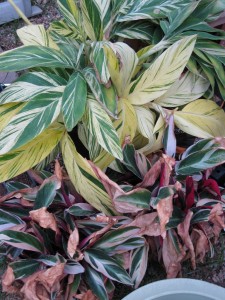 Speaking as a girl with a tasted for variegated plants, it was a deal that could not be denied. I brought home 3 2.25qt pots of variegated gingers: 1x Alpinia zerumbet variegata and 2x Stromanthe sanguinea tricolor. 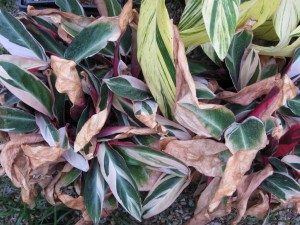 Not pictured here are two 4″ pots of purple curly-leafed ornamental kale that I picked up at Blooming Colors Nursery in Grapevine.

Tomorrow, I’ll post pics of the cleanup I performed on the gingers. I had to plant the last of the pansies flats before nightfall.