One of my favorite purples in the colorful flower garden is the Picasso Calla lily (Zantedeschia) aka Purple Wizard, according to Daves Garden Plantfile. This clump is sitting in morning sun and gets afternoon shade in the lee of our Shantung maple, along with moderate watering.

What started out as a trio of calla lily bulbs purchased from North Haven Gardens in 2016 has grown into an impressive stand of speckled foliage and beautiful purple and cream blooms over 2′ high and wide. 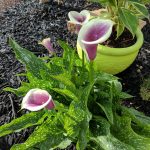 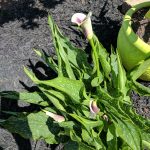 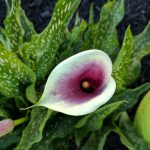 As seen in the pictures, its foliage complements a variegated ginger nicely, and would certainly look good paired with other tropical plants.

My man plans to build a water feature in our backyard (as soon as he is done thinking about it), and I have in mind to add more of these Picassos to decorate it. However, it has been difficult sourcing this bulb variety at local nurseries and garden centers this year, and I see that Pacific Callas only offers this to wholesale operators, no longer the home gardener. I did spot these at Brent and Becky’s site, so I do have options.

We accomplished a great deal over this weekend despite the cooling weather.  I took advantage of an early release on Friday afternoon to check out North Haven Gardens for tree and shade plant prospects. Takeaways included Picasso calla lily and White Star caladium bulbs, cat grass seed and a variegated milkweed by Hout Couture. I came very close to picking up a variegated hellebore (Snow Fever), cool literally and figuratively speaking, but refrained due to lack of experience. 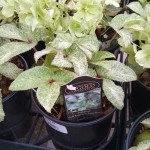 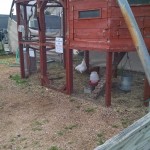 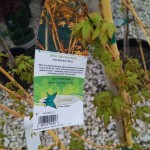 Saturday included trips to several area nurseries and feed stores looking for unusual or uncommon plants. Farm-and-feed stores differ in that they rarely carry ornamentals and focus on vegetable/crop seeds and of course farm operations. I did find it fascinating to find 3 healthy Moruga Scorpion specimens at Dennis’ Farm Store in Denton that I was half-tempted to snap up (found variegated oregano and a Golden Girl salvia instead). And who could resist the adorably cute farm babies at D&L Farm and Home Store in Aubrey? I did finally add to my cat-friendly herb planter, discovering lemon balm at Texas Seasons in Celina. 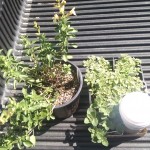 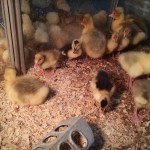 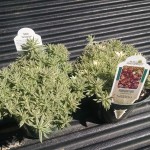 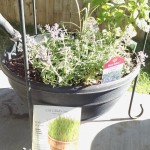 After hitting up Four Seasons and Laguna Madre for variegated sedum and a pot of lemongrass, it was off to work digging up more clay to add depth to the path nearest the fence. Then, Sunday and Monday we spent the day setting the flagstone, removing the builder-installed plants, and installing our bird-and-butterfly friendly (mostly) perennial garden. 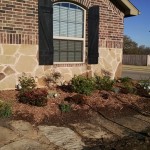 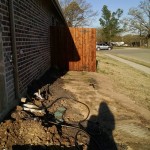 The end of March is coming fast, and we have yet to finish our yard crash. It doesn’t help that we are coming up with new ideas along the way…

The newest salvia greggii in the salvia bed has bloomed finally. Also, I’ve noted that the confetti lantanas and Purple Star verbenas in the front bed are enjoying their new home. The recent Hot Lips salvia addition keeps growing and growing…soon it will sprawl like the other Hot Lips in this bed. The dahlberg daisies are irrepressible, non-stop bloomers. As is the Thai basil, shortly before I gave it a haircut. 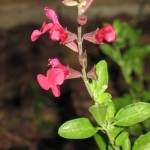 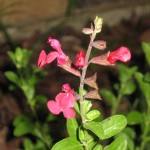 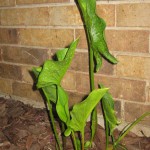 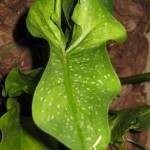 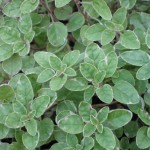 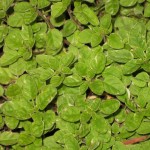 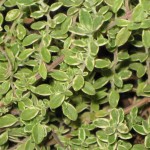 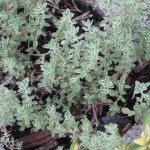 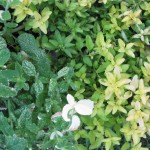 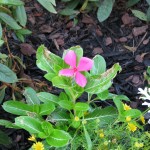 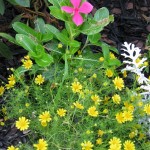 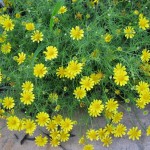 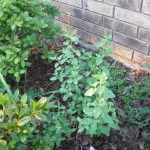 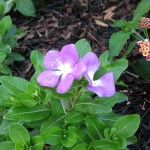 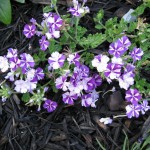 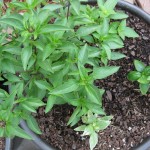 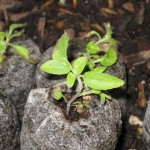 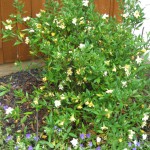 The Frostproof Gardenia has demonstrated to be a very sensitive lady. If it weren’t for the intoxicating fragrance perfuming our front doorstep, I would have voted this plant off the frontyard and into a more sheltered spot, perhaps even indoors. What appeared to be transplant shock or overwatering (yellowing leaves) shows evidence of slowing down to a halt. Perhaps the shrub has dropped all the leaves it plans to drop. We did begin watering every other day and the regular black mulch was replaced by pine bark mulch. However, the aftereffects of its displeasure still lingers…the gardenia has a host of blooms but more than 50% are yellowed or browned upon opening. As I suspected, most recommendations point the finger at overhead watering. Also, much has been published about the need for acidity in the water and soil, so acidifiers are always cited as an amendment (corn meal anyone?).

With temperatures hitting 100 degrees this weekend, we will need to keep a close eye on the gardenia to make sure it doesn’t dry out.

Worthwhile watching in the garden: the last Navona lilies are blooming, the first calla (a Picasso) put out a bloom, the only Fanal astilbe appears to put out sporadic blooms (though one Fanal I put into a pot, leafed out in the shade), the pruned yarrows are showing new buds, multiple coleus are also budding (need deadheading), the Dallas Stars daylilies are putting out their first buds, our lone Kangaroo Paw has put out some new “paws”.

Of concern: the Japanese painted ferns do not appear happy…something has changed their dispositions to where they are displaying some leaf curling/browning. They should be receiving a healthy amount of watering, but it may be that they dislike the Bayer systemic insecticide that was applied to them. The seedling dianthus may also be succumbing to excessive heat and sun. I am considering moving them to the corner garden for some part shade. The Hakonechloa in the front beds are showing some burning, which is likely to continue as the summer heats up.

Casualties: One lemon balm (potted), one dianthus. Both located in the patio garden.

The salvia bed has been planted. It’s just a matter of leveling the ground and perhaps getting them mulch (if/when funds permit). All cosmos seeds have been sown in the front yard tree ring. I need to get some vegetable and herb seeds started indoors asap!

Something is eating the coleus.

They’ve been in their flower beds for almost 2 weeks…and almost every plant is riddled with holes. The holes are small, circular but do not display any browning. I’m concerned that if this siege continues, the coleus will be thoroughly consumed and killed. I’ve been looking into a systemic solution such as Bayer Advanced. I’ve used it in previous years with some success, but it may take time before it goes into effect. I may have to get an insecticidal soap to get faster results.

The most current tally of lily bulbs: 12. Which means only 3 more lilies (mostly Lollypops) have yet to make a showing. I’ve discovered that the Devil’s Wine calla has sent up a tiny spire. The Snowdrift Astilbe is making slow progress, fanning its leaves. With the recent rains, the azalea blooms on Delaware Valley White and Hot Shot are getting washed away, forming something of a papery mess. The other red azalea is finally showing buds, but the Macrantha and the Gumpos have yet to show off any potentials. With the crape myrtles finally fully leafed, the courtyard bed is nearly in part/full shade for most of the day.

In the front yard, the Encore blooms are sparse. Embers has about wrapped up their show, while the Monarch has not made a profuse showing, teasing us with a handful of coral red blooms. However, Twist is about to make a grand showing. The shrub is smothered with buds about to burst. If it doesn’t bloom in the 24 hours, I will be surprised. The rest of the front bed is settling in–the Firehouse nandinas are shedding the last of their winter coats. The 2 Dallas Stars have put out new straps. Still no signs of life from the Hosta Minutemen or the astilbe Fanal and Amerika.

Seed starting kits can dry up, so it’s always important to check the water level to make sure seedlings are getting the necessary moisture. Last night, I discovered that the water reservoir had been emptied, and the dianthus seedlings were the first to show any stress. I had intended to transplant them to their new homes, but it will have to wait until they are revitalized.